Leslie Pelkey was my great uncle. I never knew him, but I grew up listening to my grandfather talk about him. After being discharged, Leroy purchased and ran a gas station in his hometown of Renovo, PA. My grandfather worked for him, making $15 a week.

Sergeant Leslie Pelkey was assigned to C Company of the 10th Armored Infantry Battalion of the Fourth Armored Division. He landed in Normandy approximately 30 days after June 6th, 1944 and was in combat operations for all five major combat engagements including Normandy and central Europe. He was involved in battles around Bezange, France. There, he earned the Silver Star Medal for actions on September 27, 1944. On December 23, 1944, C Company (and 8th Tank Battalion) arrived south of the village of Chaumont. The plan was for both C Companies of the 10th Armored Infantry Battalion and 8th Tank Battalion to assault the village from the left flank. The other units of these battalions were to assault from the center and right flank. From the start things weren’t going well as about 5 Shermans of C Company, 8th Tank Battalion became bogged down in the field (due to a barely noticeable stream running through it). This rendered C Company without tank support, so they had to assault the nearby “Bois Saint-Hubert) on their own. Heavy fighting broke out when the German paratroopers of Regiment 14 and several assault guns launched a counterattack as soon as the Americans had reached the center of the village of Chaumont. It was during these actions that Staff Sergeant Leslie Pelkey was wounded by a gun shot in the left ankle (earning him the Purple Heart Medal). However, he remained on the battlefield (as evidenced in the morning report of December 28, 1944).

While I never got to meet my Great Uncle, he is a great inspiration to me.  I believe it is important to remember his sacrifices. As President Truman said: “Our debt to the heroic men and valiant women in the service of our country can never be repaid. They have earned our undying gratitude. America will never forget their sacrifices.” 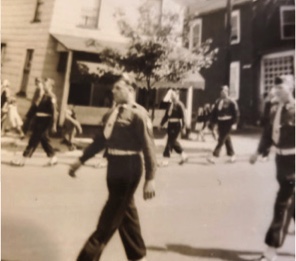 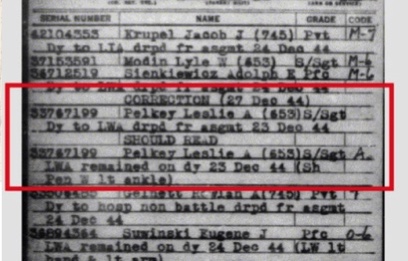